Helping you make a smart move.

Whether you’re involved in a corporate relocation or moving here from another town, we can make relocating as easy as moving next door!

We work with agents and agencies from across the country, and we serve some of the best relocation companies around including Cartus, Weichert Workforce Mobility, Altair Global Relocation, and Brookfield Relocation. Stephens can connect you with a first-class agent or agency anywhere in the United States. As a member of The Worldwide ERC® we have the resources to connect you with the right professional who will assist you with your next move.

And We Love Baldwin City!

You can also visit us our office at 703 High Street, Baldwin City, KS 66006
More Info
Previous
Next

Located about 41 miles west of Kansas City and about 20 miles east of Topeka, Lawrence is situated perfectly between two major metropolitan areas.

Lawrence  is located in Northeastern Kansas in Douglas County. The sixth largest city in Kansas, Lawrence is home to the University of Kansas and Haskell Indian Nations University. Douglas County also includes the communities of Baldwin City and Eudora.

Founded in 1854,  Lawrence was named after Amos Adams Lawrence, a politician and antislavery advocate. Lawrence is known not only for the first class university, but also for the fiery Civil War history known as Bleeding Kansas. From Quantrill’s Raid to the burning of The Eldridge Hotel, Lawrence was the center of the battle to decide if Kansas was to be a free or slave state. Aiding in the historical significance of Lawrence are the ties to James Naismith, the inventor of basketball, and former coach for the University of Kansas.

Known as the “Center of the World” by Google Earth users, Lawrence is the focused center when viewing the default position of the program (the program was developed by KU graduate Brian McClendon). From the beautiful downtown to Mount Oread, Lawrence has something to offer everyone

One of the top college towns in America

Some of the Best College Towns in the US – usatoday.com

The 50 Best College Towns to Live in Forever – collegeranker.com

With its red brick and tree-line streets, Baldwin City offers memorable small town shopping and special events. One noteworthy event includes the annual rite of autumn, The Maple Leaf Festival, featuring a parade, arts & crafts and historical area tours attended each year by thousands of visitors to the community. 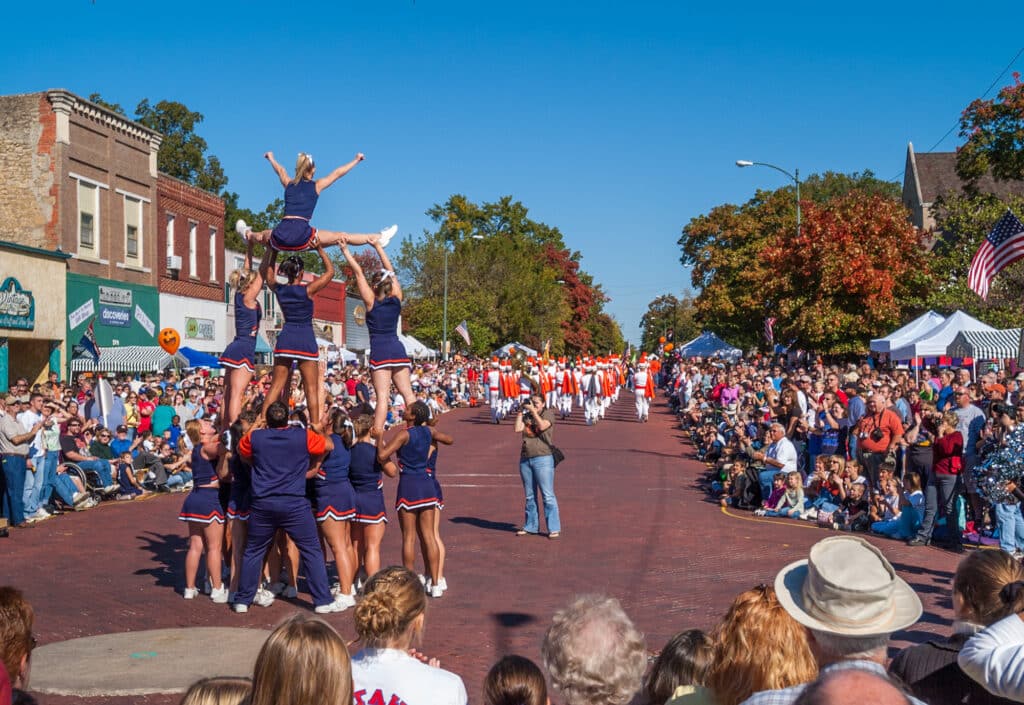